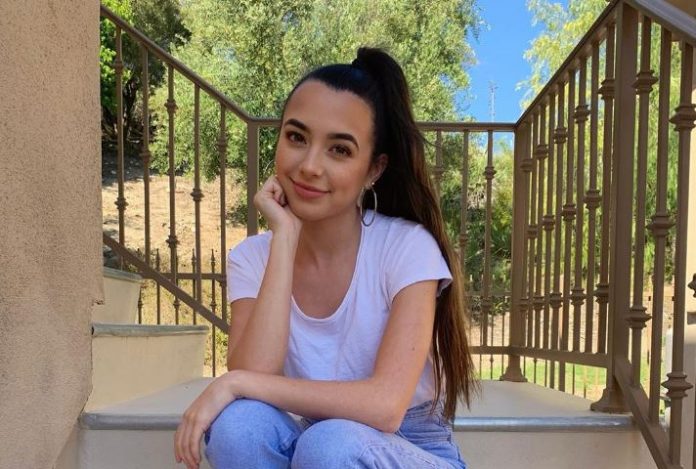 One-half of the Merrell Twins, Veronica Merrell, features comedy, music videos, and video blogs on the platform of her YouTube channel ‘Merrell Twins.’

Veronica Merrell has been recognized as one of the aspiring YouTubers and has cemented her name as Top 10 Actor for Improvisation at the 2009 Actors, Models, and Talent Competition.

The YouTube star is also an actress and has credited for different roles alongside her identical twin sister Vanessa Merrell in Jane the Virgin, Fakin It. The twins landed in commercials for the retail company Build-A-Bear in 2008.

Veronica was born in Kansas City, Missouri on 6 August 1996 to Paul Merrell and Wendy Merrell. Veronica Merrell age is currently 22 years old. Her father Paul is a video producer, who has been supportive of her blogging career. In her family, Veronica has a sibling sister named Vanessa, who is the youngest of the twins.

Talking about Veronica’s body measurements, the YouTube star has a height of 1.57 m (5 feet 2 inch), and her weight is around 48 kg (106 lbs). She holds American nationality. Her ethnicity is mixed (Mexican, Spanish, Irish, German, Portuguese, and possibly others).

Who Is Veronica Merrell Boyfriend/Partner?

One of the Merrell Twins, Veronica has had colorful affairs with several men. You guys might get surprised knowing the fact that she was already in a relationship while pursuing schooling.

Veronica Merrell first affair was with a childhood boyfriend, Nathan. The former couple, who met at a science lab during 4th grade inaugurated their dating in 5th grade.

Although they are currently no more in a relationship, both of them are great friends. Veronica even has featured Nathan on her YouTube videos expressing their childhood and fun moments. Veronica also dated Ryan Ardi briefly and collaborated with him on YouTube videos. They were one of the fans-cherished couples on YouTube, but they could not savor their bond for long and had a heartbreaking break up.

Years have passed; however, she has not flashed her possible romantic love life. However, at the moment, fans have been linking Veronica with YouTuber Aaron Burriss who is a video blogger known online as Lazyron Studios. Better known as ‘Ronron,’ Veronica and Aaron are speculated to be dating secretly.

Although neither of the pair has confirmed their relationship, both of them collaborate on YouTube and enjoys their closeness.

How Much Is Veronica Merrell Net Worth 2019

One of the famous YouTube personality and actress Veronica Merrell has the net worth of $2 million.

The one-half of the Merrell twins has a YouTube channel titled ‘Merrell twins’ that has the estimated earnings between $4.1K to $66K per month and $49.5K – $791.8K per annum, as per the record of Socialblade. She and her sister Vanessa entertains viewers with their video blogs where they have more than 4.3 million subscribers.

The twins also have a second YouTube channel MoreMerrell where they shared beauty tips, fashion, and blogs. They even won YouNower of the Year award in 2016 and was invited to the White House by the likes of then-first lady, Michelle Obama.

Besides her YouTube career, Veronica is active on the entertainment industry and has been featured in several TV shows such as Jane the Virgin; Faking It; and Hyperlinked. She is also set to appear in 2020 film Limited Partners with a role of Lux.