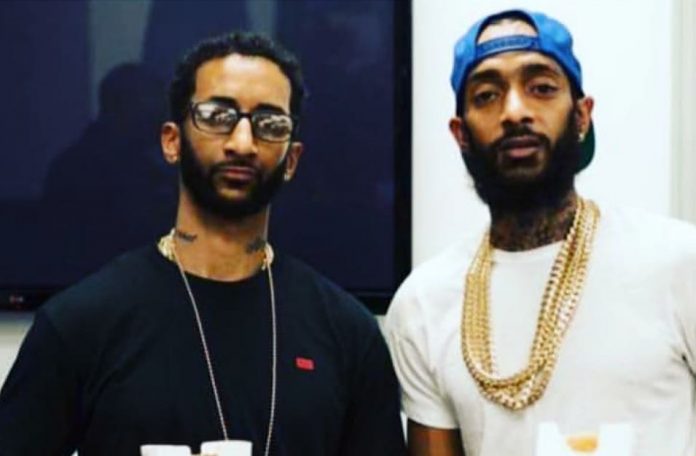 Samiel Asghedom aka “Blacc Sam” is the brother of American rapper Nipsey Hussle. The late music artist, Nipsey, was killed on 31 March 2019. He was shot six times in front of his clothing store in South Los Angeles. Police are still investigating the case. Blacc Sam hasn’t publicly responded to his brother’s death. According to the LA police, three people were shot in the gunfire. And people in social media are speculating that Nipsey Hussle’s brother is one of those victims. Nonetheless, LAPD hasn’t acknowledged the rumor. Who is Nipsey Hussle’s brother Samiel Asghedom? How old is he? And what is his net worth of 2019? Before we get into the details, put on hold to see his wiki, bio, age, and height. Then see his Instagram link and family.

Born and raised in South Los Angeles, California, Nipsey Hussle’s brother is of Eritrean American descent. Sources have reported that he was extremely close to his brother- they were like best friends. Speaking of his parents, Samiel’s mother is an African-American while his father is a native of Eritrea; he later moved to the Red Sea coast of Africa. At the age of 18, Nipsey Hussle visited Asmara, the Eritrean capital, with his brother and father. The trip was a cultural shock to the then-aspiring rapper. But at the same time, it gave the inspiration to start his own brand Capitalism. The two brothers again visited their homeland in 2018. According to CNN reports, Nipsey Hussle and his brother even the Eritrean President Isaias Afwerki. They were also interviewed by the Ministry of Information’s website and talked about the Los Angeles gang violence culture. Samiel Asghedom’s brother, Nipsey, died at the age of 33. This year, the late rapper was even nominated in the Grammy’s for the Best Rap Album. His first studio album Victory Lap was not only a commercial success and also a critically acclaimed feat.

Los Angeles native Samiel Asghedom is the co-owner of The Marathon Clothing. Their clothing store was opened on June 17, 2017, in the presence of their friends, family members, and a huge legion of fans. Celebrities like 21 Savage, Russell Westbrook, Vegas Jones, and Demarcus Cousins had come to support the grand opening. Their store building is located in the Hyde Park neighborhood of Los Angeles. Reports from XXL Magazine revealed that their store has all kind of latest technologies. From a special app for exclusive releases and arrivals to the store-inbuild programmable technology, Marathon Clothing has it all. Nipsey Hussle and his brother used to sell everything from t-shirts to sweatshirts, hats, and other products. Reflecting on the commercial success of their business Samiel Asghedom has a considerable net worth. Latest reports from Cheatsheet revealed that Nipsey Hussle has an estimated net worth of $8 million. However, his brother, Samiel Asghedom net worth figure isn’t available.

Away from The Marathon Clothing store, Nipsey Hussle’s brother is apparently one of the partners of the Margaret Boutte Foundation Inc.- a non-profit organization. Last year, he also appeared in a documentary called 10 Rings with his brother. Back in 2011, he was arrested while having an argument with Eugene “Big U” Henley. And not to forget, a few months ago, he was in jail and paid $1 million to get out. Speaking of Samiel Instagram, his IG account is apparently inactive. However, hundreds of posts with #blaccsam are available on Instagram.

Is Rapper J. Holiday Single Or Dating Girlfriend, How Much Is...