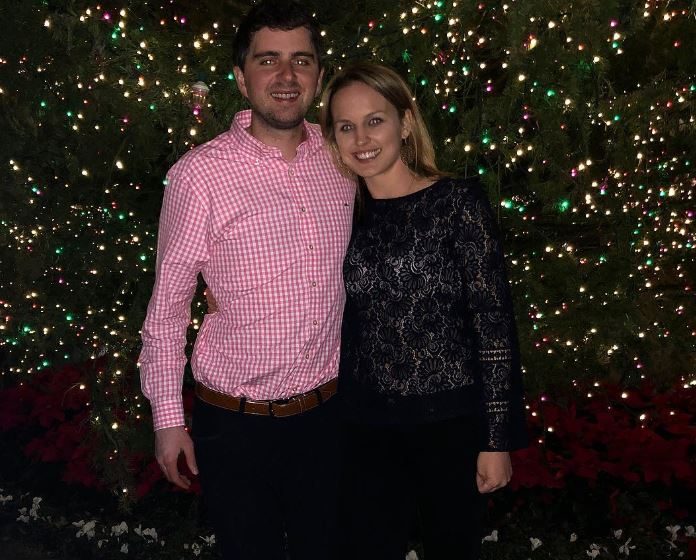 The 41st President of the United States, George Herbert Walker Bush passed away at the age of 94. Most of the family members and politicians attended his funeral in Houston. At the funeral, late George H. W. Bush’s precious grandchildren gave a Bible reading. And one of them is Nancy Ellis LeBlond Sosa. She is the daughter of Dorothy “Doro” Bush Koch who is the only living daughter of former president George H. W. Bush.  Among the large family of Bush, today we will be exploring some facts of Nancy Ellis LeBlond Sosa. Many of you might know she is the granddaughter of late George H.W. Bush, but she also has some facts you don’t want to miss out. So, let’s take a closer look at Ellie Leblond Sosa wiki facts, her relationship with husband and also peek into her net worth and wedding details. YOU MAY LIKE: Who Is Lola Mitchell aka Gangsta Boo, Is She Married Or Engaged?

Who is Ellie Leblond Sosa?

Nancy Ellis LeBlond Sosa a.k.a. Ellie is one of the beloved grandchildren of late George H. W. Bush. Ellie Leblond Sosa birthday is in the year 1986, her current age is 32 years old. Ellie Leblond Sosa is professionally a certified holistic health counselor. When it comes to her parents, Ellie is the daughter of Dorothy Bush Koch and William “Billy” Heekin LeBlond. They married each other in the year married in 1982. However, their relationship didn’t work out so her parents divorced in 1990. She also has an older brother named Samuel Bush (b. 1984).

We sure will miss this sweet, sweet man. The man who embodied integrity, service to others, kindness, and love. Comforting to know he’s now with the love of his life, our sweet Ganny and their daughter Robin. Rest In Peace Gamps. 💗

While her mother got remarried, Ellie was working at the National Rehabilitation Hospital in the special events department in Washington. Apart from that, Ellie also has two half-siblings from her mother’s, Dorothy, second marriage. Her mother Dorothy married her second husband, Robert P. Koch in the year 1992. And the couple shares two children- Georgia Grace Koch and Robert P. Koch who are Ellie’s half-siblings. YOU MAY ALSO LIKE: Who is Anne Marie Green daughter, Ailey Lynn Allen?

It has been more than five years since Ellie Leblond Sosa led a blissful married life with her husband. And to this day, there are no such rumors of dispute and divorce exist between the couple. Ellie Leblond Sosa married her now-husband Nicholas Sosa in 2014. Both of their family were a long-time friend. Even though Ellie Leblond Sosa and her then-boyfriend attended the same picnic in 2006, the pair didn’t meet until they were 24. A wedding website said,

“Though their families had known each other for many years, Ellie and Nick somehow went 24 years without crossing paths.”

Although there’s “photographic proof” they attended the same summer picnic in 2006, neither “remembers meeting the other until the summer of 2009.”

Ellie Leblond Sosa wedding ceremony took place in Kennebunkport, Maine, the town and it’s the same place where the husband and wife first met. YOU MAY ALSO LIKE: Who Is ‘The modern family’ star Sarah Hyland brother Ian Hyland?

In the year 1988, Ellie appeared in one of  George H.W. Bush’s campaign ads. At that time, he was running for president. Seen in his iconic ad, Ellie was a toddler who jumped into her grandfather’s arms after running across a yard. Her Instagram account tells that she is a teacher at a yoga studio called ‘Barre & Soul’ in New England. Whereas, she also teaches fitness in Boston as well as around the world. On the other hand, Elle is also a co-author of a book titled “George and Barbara Bush: A Great American Love Story.” Currently, she works for a Boston-based health care non-profit as per UNE.edu. Moreover, in 2018, George H. W. Bush granddaughter Ellie Leblond Sosa net worth is under review. YOU MAY ALSO LIKE: Elliot De Niro Wiki Facts, How Old Is Robert De Niro Son Elliot De Niro? YOU MAY ALSO LIKE: Yungblud aka Dominic Harrison Wiki Facts, How Much Is Yungblud Worth?