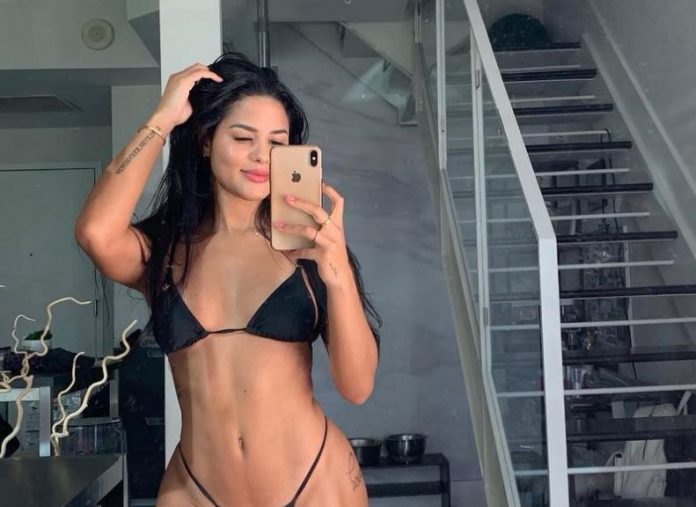 Katya Elise Henry is an Instagram fitness sensation whose massive fan following of 5.5 million is escalating every day. With insane curves and bootylicious physique, this brunette beauty has the body of a goddess. Katya’s Instagram feeds reveals that she is not only a model but also an entrepreneur. To put a cherry on top, her popularity is soaring with her recent alleged relationship with Kyle Kuzma. Before this dating buzz, the model was in a relationship with a famous American singer. Who is Katya Elise Henry’s boyfriend? Is she married? What is her net worth of 2019? Let’s get into the tea! Stick with us as we warm up with Katya Elise Henry wiki, bio, age, height. Then we will reveal her ethnicity and nationality.

Instagram model Katya Elise Henry was born on 4th June 1994. Her birthplace- as reported in her biodata- is Minneapolis, Minnesota, United States. She went to Desert Mountain High School in Scottsdale, Arizona for higher secondary education. There she joined the cheer-leading team and became one of the most popular cheerleaders. According to sources, Katya started her fitness journey in the senior year of high school. The model jumped off by posting short videos and snaps of her toned body in 2013 and before she knew it, she became an internet sensation. In age, Katya Elise Henry is 24 years old as of 2019. Her apparent boyfriend, Kyle Kuzma is a year younger than her. The brunette damsel stands at an average height of 5 feet and 2 inches. While her weight lies between 115-125 lbs.

Minnesota native Katya Elise is currently dating an American basketball player Kyle Kuzma. Allegedly, the two met last year in 2018. Fans woke up and smelled the tea when Katya attended Laker Games in previous season. She was seen cheering and supporting the rookie NBA player- apparently, it seemed so. The rumor first started when this anonymous photo of Katya was uploaded in the internet. Sources quickly noticed those tattoos are identical to the ones in Kyle Kuzma’s hands. TMZ sports published an article confirming the unidentified man is Michigan Local basketball player, Kyle. Nevertheless, it must be noted that Katya Elise Henry hasn’t confirmed whether Kyle Kuzma is her real boyfriend. In fact, both of them aren’t vocal about their dating status. Previously, this Instagram sensation was dating American singer Austin Mahone. Reports from Heightline revealed the two stayed in relationship from December 2015 to February 2017. Katya’s ex-boyfriend officially disclosed their break-up news and confirmed their split.

With reference to Katya Elise Henry’s net worth, she makes a fortune from her online business empire. The model has her own bikini line and workout programs. She has also collaborated with fitness and supplement brand EHPlabs. Her commercial appearance extends from Joe Weider’s Olympia Weekend to Body Power Expo. Not to forget, the model bags nifty sum for endorsing and promoting products in her Instagram page. Her net worth of 2019 is estimated to be over millions. The recent dating rumors with Kyle Kuzma has gave her more exposure. So, it won’t be wrong to assume, the lad will use the platform to milk some payroll. Katya Elise Henry’s net worth is currently under review and will be updated soon. According to The Squanders, Katya’s apparent boyfriend, Kyle Kuzma, has a net worth of $1.7 million in 2019.