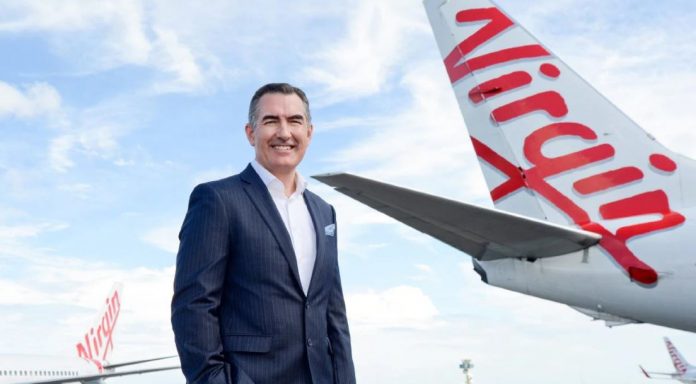 Paul Scurrah is an Australian with strong experience in large scale logistics and transport. Virgin Australia announced on Wednesday, February 6th, 2019 that Paul Scurrah will take over as its chief executive on March 25th replacing John Borghetti, who over eight years has transformed Virgin from a budget airline into Australia’s second full-service carrier.

Paul Scurrah is currently the chief executive and managing director of DP World Australia and director of the Gold Coast Football Club. His previous roles included executive vice president of commercial and marketing at Aurizon; chief executive of Queensland Rail; and more than 20 years of experience in transport, tourism and customer service at companies including Flight Centre, Tourism Queensland, Ansett, Qantas, and American Express.

Paul Scurrah last worked in commercial aviation in 2002, as general manager of sales and marketing at Ansett Australia while it was under administration, and prior to that was at Qantas.

Paul Scurrah has spent the past 17 years in travel and logistics, including stints at Flight Centre, Queensland Rail, Aurizon and most recently was CEO of stevedores DP World Australia.

How Much Is CEO Paul Scurrah Net Worth And Salary

Virgin Australia Paul Scurrah will be paid a base salary of $1.3 million a year which is way lower than the previous boss, Borghetti’s $1.95 million.

Paul Scurrah, however, has the potential to earn a cash bonus of up to $1.95 million. Another $1.95 million in cash and shares will be available as a long-term bonus if he hits targets relating to shareholder returns and return on invested capital.

As per sources, Virgin Australia Paul Scurrah net worth is estimated to be $10 million as of 2020.

Who Is Paul Scurrah Wife?

How Old Is Paul Scurrah?