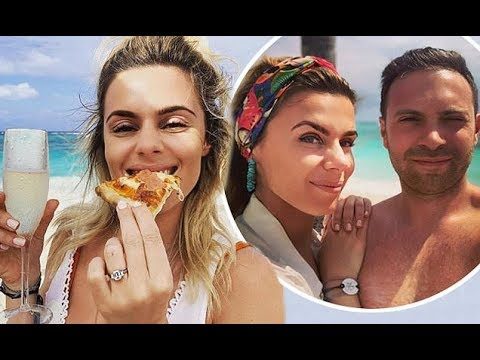 In the Dominican Republic, the former EastEnders star Matt Di Angelo had been celebrating his birthday. What’s more, taking his chance, Mr. Angelo announced his engagement with his long-term girlfriend, Sophia Perry.

Besides, the pair have been dating each other for five years now. And finally, they have engaged for good. So, without any further delay let’s have a detailed look at the couple’s engagement.

Following the pair’s engagement, have an insight on Sophia Perry’s background. Explore her age, height, ethnicity, and nationality through her wiki.

Who is Sophia Perry? Wiki; Age, Height, Ethnicity, and Nationality

The name ‘Sophia Perry’ made several headlines when her name was linked with the former EastEnders star, Matt Di Angelo. Aside from that, the only information regarding Ms. Perry is her profession i.e., wedding planner.

Despite the lack of information on her birthday, Sophia Perry might be in her late twenties or thirties in terms of her age.

Ms. Perry’s activeness on social media lets us see her different sides including her beautiful family, parents, and friends as well. the wedding planner often uploads the pictures of her family members.

Apart from her parents, Ms. Perry also has an older brother named Tony Perry who is a DJ. Her brother runs his Instagram account under the name (thedjtp).

On Instagram, the actor Matt Di Angelo confirmed the news of his engagement with a series of pictures.

In the beach of the Dominican Republic, Mr. Angelo proposed his long-term girlfriend, Sophia Perry on his 32nd birthday. Additionally, over pizza and champagne, he asked Sophie to marry him. Above all, he brought out an engagement ring – baguette cut diamond set with a simple platinum band – in a white jewelry box.

In addition to the engagement ring, Mr. Angelo also brought champagne. On the other hand, Ms. Perry took to her own Instagram account to share the news. She captioned it as,

“I heart PIZZA… AND MY FIANCÉ.

Since 2014, the pair have been dating each other. In 2007, following his appearance on Strictly Come Dancing together, Mr. Angelo previously dated Flavia Cacace, a dancer.