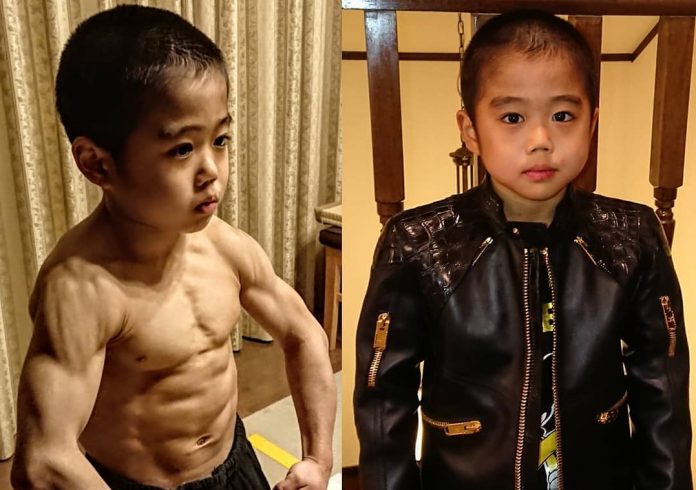 The child prodigy, Ryusei Imai is breaking the internet with his martial arts skill. Only an 8-year-child, Ryusei has been given the nickname, Bruce Lee Kid for his wicked and masterful martial art skills.

Ryusei Imai is a big fan of the martial arts legend, Bruce Lee and can exactly imitate Lee’s fight scenes from the movies. Bruce Lee Kid Ryusei has been a fan of Bruce Lee since he was a one year child.

He goes through an extreme regiment of workout every day. Though he is only eight years now, he already has six-packs.

Little Big Shots Ryusei Imai had his first introduction in the mainstream media three years ago. Ryusei had published a video where he had imitated his idol, Bruce Lee’s action routine from the hit 1972 Bruce Lee’s movie ‘Game of Death’. Ryusei Imai video went viral thus earning him the name ‘Bruce Lee Kid’.

Since Ryusei started chasing his dream to become like his master, ‘Burce Lee’, Ryusei has been keeping a strict regiment of training. Ryusei Imai begins his training earlier in the morning.

Ryusei Imai father says that he gets up at six o’clock in the morning and perform his daily workout for one and half hour every morning, before going to the elementary school. After the school, he runs for an hour and works on his kicks and nunchuck skills for another two hours. This extreme training regiment has already given him body and skills that he can synchronize with Bruce Lee.

This little kid is awesome. 👊💥 From @ryusei2010 – way of the dragon #brucelee #ryuseiimai #6yearold #littlebigshots #martialarts

Ryusei has already gained speed, agility, and control of a martial artist. When asked about his earlier experiences, Ryusei said,

“I’ve watched his movies since I was one year old and tried to be like him. I made a lot of mistakes at the start like I couldn’t get the exact timing.”

Little Big Shots Ryusei Imai has been invited by Steve Harvey in the reality show Little Big Shots when it premiered in 2016. Ryusei Imai performed an action stunt by Bruce Lee from the hit movie ‘Game of Death’, before breaking into giggles and running around the stage.

Again in 2017, Ryusei Imai was invited in Little Big Shots Australia when it premiered for season 2. The host Shane Jacobson invited him on to have a little chat about his workout and joined in for a little training himself. Further, he performed an action stunt by Bruce Lee in Little Big Shots.

Ryusei Imai age is 8 years. Ryusei celebrated his 8th birthday earlier this year. Ryusei was born in the year of 2011. Ryusei Imai was born in Nara, Japan and continues to live there with his family. Ryusei Imai parents have been very supportive towards him.

Ryusei Imai parents are helping him in every for him to realize his dreams. Being of Japanese nationality, both Ryusei Imai and his parents, Ryusei Imai is of Yamato ethnicity.